This is a Germany guide

The Oktoberfest is the world's largest Volksfest that is held annually in Munich. Volkfeast is a large event in Germany that combines the beer festival with a traveling funfair. Let's find out more about Oktoberfest's16 days of madness.

This video is designed to teach travelers about the German culture and cultural differences and norms that may be found throughout the Germany.

Homelessness is making headlines in Berlin: the struggles and sufferings from those who have hit hard times. This special report looks at the homeless capital of Germany 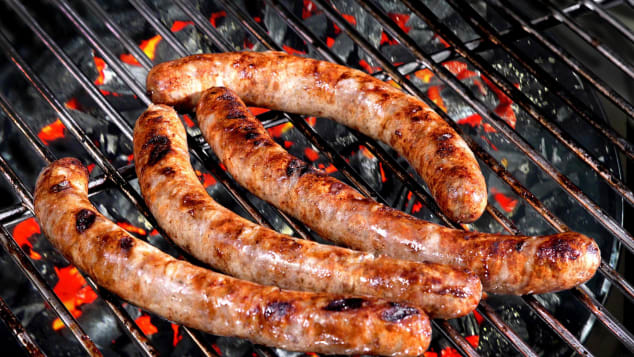 There is no Germany without sausages.

There are countless cured, smoked and other varieties available across wurst-loving Germany, so, for this list we will focus on some of the best German street food: bratwurst, or fried sausages.

There are more than 40 varieties of German bratwurst. Fried on a barbecue or in the pan, and then served in a white bread roll with mustard on the go, or with potato salad or sauerkraut as the perfect accompaniment for German beer. 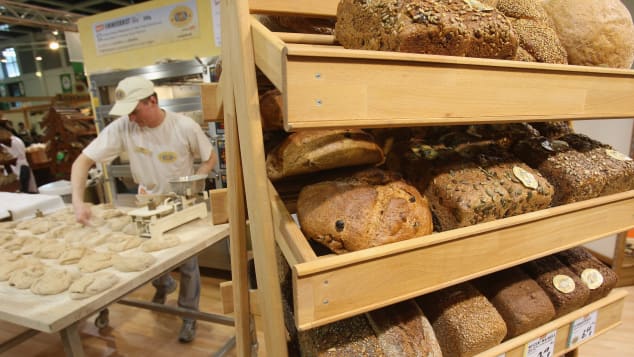 Fried potato pancakes are so popular in Germany that we have more than 40 names for them. They are known as reibekuchen, kartoffelpuffer, reibeplätzchen, reiberdatschi, grumbeerpannekuche and so on and so on.

Another quintessential German comfort and street food, reibekuchen are often served with apple sauce, on black pumpernickel rye bread or with treacle (a type of syrup). 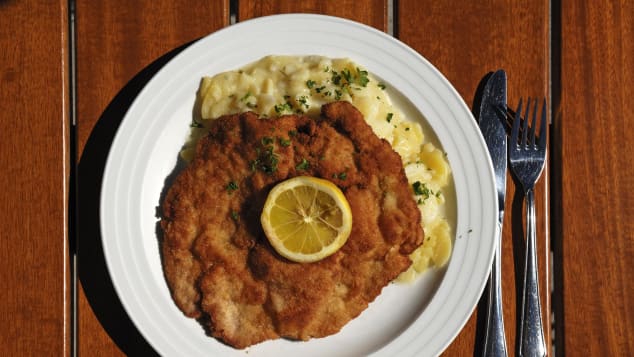 Some might argue that schnitzel is Austrian and not German, but its origins are actually Italian.

This controversy hasn't stopped the breaded and fried meat cutlets to become popular everywhere in Germany, however. While the Austrian or Vienna schnitzel is by law only made with veal, the German version is made with tenderized pork or turkey and has become a staple of most traditional restaurants.

All go well with fried potatoes and cold lager or a Franconian apple wine. 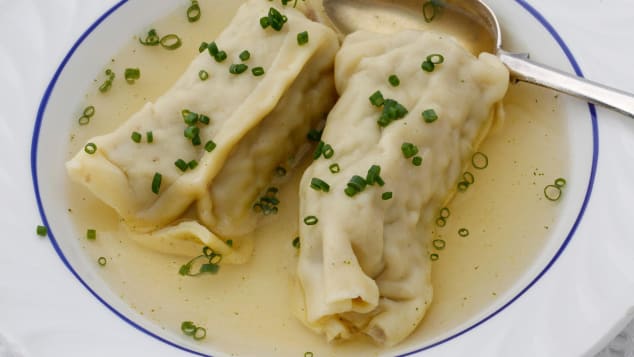 Maultaschen from Swabia are a lot like ravioli but bigger. They are typically palm-sized, square pockets of dough with fillings that run the gamut from savory to sweet and meaty to vegetarian.

A traditional combination is minced meat, bread crumbs, onions and spinach -- all seasoned with salt, pepper and parsley. They're often simmered and served with broth instead of sauce for a tender, creamier treat, but are sometimes pan-fried and buttered for extra richness. 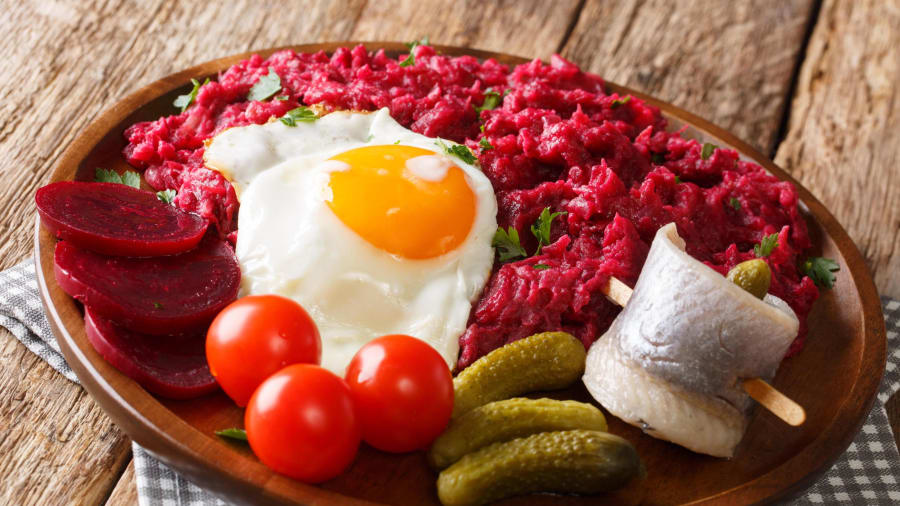 Labskaus is not the most visually appealing dish, but a delectable mess that represents the seafaring traditions of northern Germany like no other. In the 18th and 19th centuries, ship provisions were mostly preserved fare, and the pink slop of labskaus was a delicious way of preparing them.

Salted beef, onions, potatoes and pickled beetroot are all mashed up like porridge and served with pickled gherkins and rollmops (see below). It has long been a favorite of Baltic and North Sea sailors. 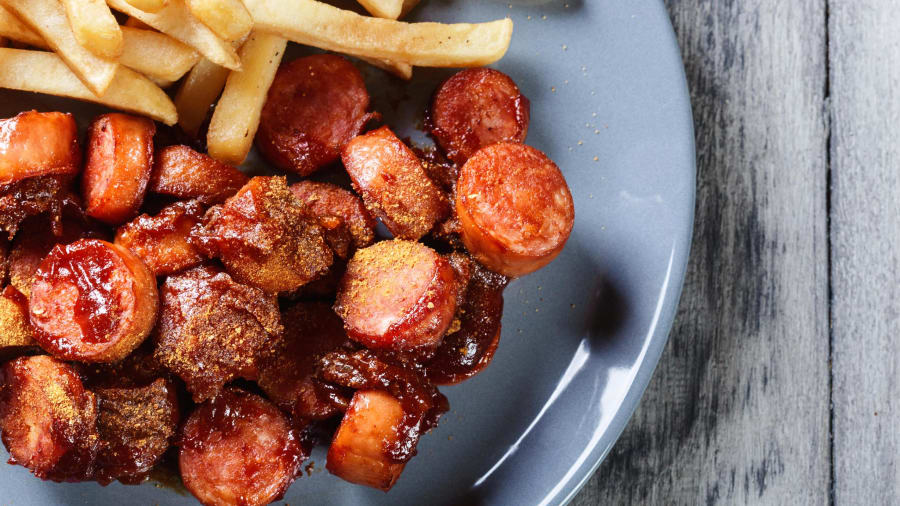 Practically synonymous with German cuisine since 1945, currywurst is commonly attributed to Herta Heuwer, a Berlin woman who in 1949 managed to obtain ketchup and curry powder from British soldiers, mixed them up and served the result over grilled sausage, instantly creating a German street food classic.

Today, boiled and fried sausages are used, and currywurst remains one of the most popular sausage-based street foods in Germany, especially in Berlin, Cologne and the Rhine-Ruhr, where it's usually served with chips and ketchup or mayonnaise or a bread roll.

Not the most sophisticated of dishes, but a filling street snack born out of necessity about which all of Germany is still mad: some 800 million are consumed a year. 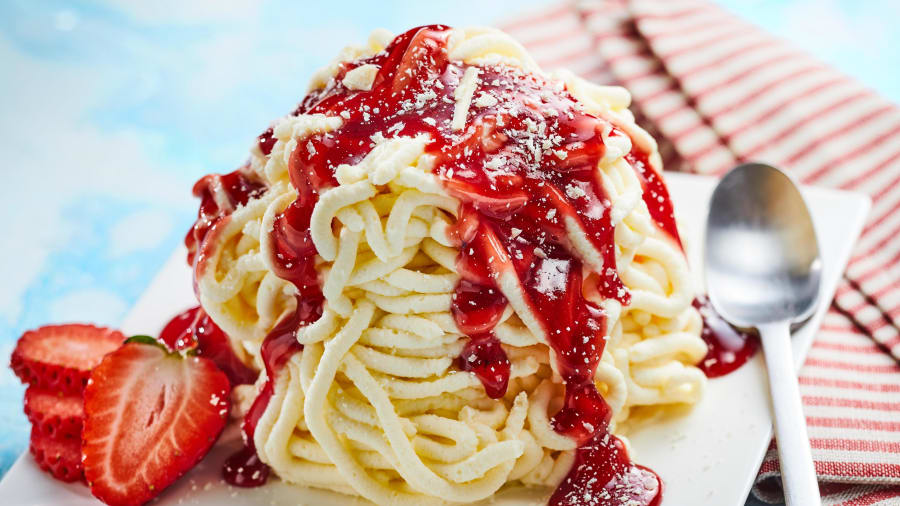 This dessert is another immigrant legacy and is popular with German children.

Spaghettieis is an ice cream dish made to look like a plate of spaghetti. Vanilla ice cream is pressed through a modified noodle press or potato ricer, giving it the appearance of spaghetti. It is then placed over whipped cream and topped with strawberry sauce representing the tomato sauce and white chocolate shavings for the parmesan.

Besides the usual dish with strawberry sauce, there are also variations with dark chocolate ice cream and nuts available, resembling spaghetti carbonara instead of spaghetti bolognese.

Spaghetti ice cream was invented in 1969 by Dario Fontanella, son of an ice cream-making Italian immigrant in Mannheim, Germany. Thankfully for us and perhaps unfortunately for Dario, he didn't patent his spaghetti ice cream and it is today available at almost every ice cream parlor anywhere in Germany.

Filling and flavorful dishes that are best enjoyed alongside a cold beer and a warm fire. Let's find out what delicacies Munich has to offer.

The video showcases the top 10 awesome facts about German culture.