Skip to main content
It looks like you're using Internet Explorer 11 or older. This website works best with modern browsers such as the latest versions of Chrome, Firefox, Safari, and Edge. If you continue with this browser, you may see unexpected results.

Which Law Report do i cite?

In England there are many Law Reports and the same case can be cited in a number of Law reports.

Which is the best report?

There is a standing hierarchy as to the court's preferred citation.  "In England and Wales, there are no official law reports of any kind but the Law Reports series published by the Incorporated Council of Law Reporting are regarded as the most authoritative reports."  OSCOLA 4th ed. www.law.ox.ac.uk/oscola  at 17

3. Specialist series of Law Reports (For example: Lloyd's Law Reports, Industrial Cases Reports) are published commercially and used only if a case cannot be located in the above series.

How do I find a UK case?

Given a case citation, example:

Check Cardiff Index for the jurisdiction.

As this is a UK case, use JustCite to determine the pertinent database. JustCite can be found in Lawnet.

JustCite can tell us which is the Database that we can use to find the case. It also tells us the legislative history, subsequent treatments and other useful information when researching. 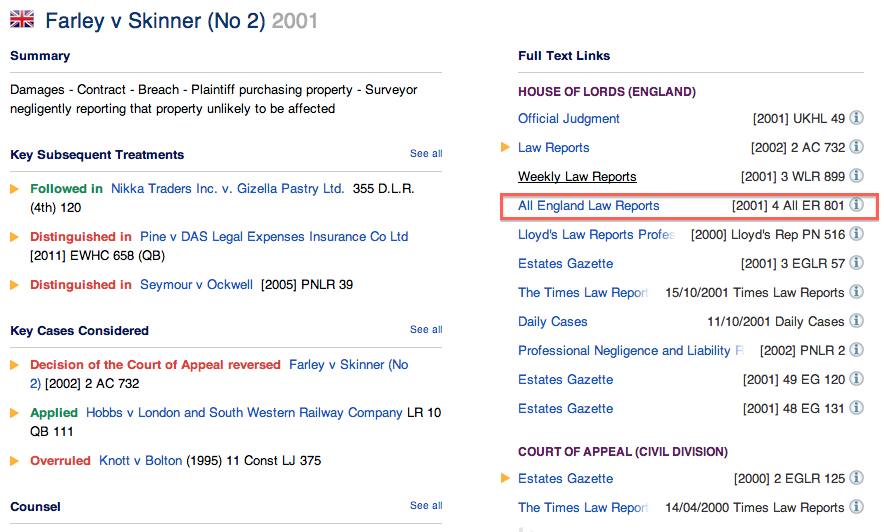 Clicking on the All England Law Reports link shows the appropriate database to use.

Locating and English Case with JustCite